Today I welcome Scott James Magner to the blog. He’s a “writer, editor, designer, developer, and world builder” who has worked on everything from science fiction novels to card games to radio ads. In between all that, he found time to answer a few questions. Read on: 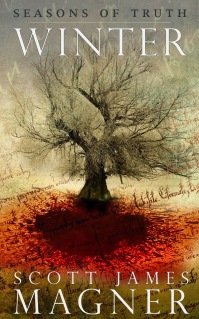 Neve: Scott, you’ve written science fiction novels, novellas, serials, magazine pieces, text/stories for video games and table-top games… Have I missed anything? Where do you recommend readers start in getting to know your work?
Scott James Magner: Card games, miniatures games, legal briefs, web sites, white papers, radio advertisements…just about anything I can get paid for, really. I describe myself as a marketing hack to students, when asked what kind of writing I do. Novelist is far too romantic a notion, and one I believe should be beaten out of English majors early on while their hearts are still unbroken. The stuff I wrote just out of school makes me cringe today, as does stuff I wrote 10 years ago, 5 years ago, and last year.
As to where to begin, www.scottjamesmagner.com is the home of all things me.
N: So what is a Bhagwan (the name of your website)?
SJM: A very long story indeed, and one I don’t tell that often. It started as a mistake of sorts, and turned into an alternate identity that I may never shake. The easiest way to explain it is to say that some folks understand satire, and others live it. I’ll leave it to the readers to determine which one I am.
N: How did signing with 47North come about?
SJM: Technically I never signed with 47North, but I can speak to the spirit of the question.
My friend and frequent publisher Mark Teppo was looking to flesh out the universe of the Mongoliad(known collectively as the Foreworld Saga, and hosted online at www.foreworld.com) with novellas featuring different stories than they could tell in the pages of the main plot. At this point, only two volumes of the Mongoliadwere out, which meant there was a lot of uncharted space on the map.
At a party one night, we discovered that we’d done a lot of the same linguistic research on medieval Europe, which led to him asking for a few writing samples. Specifically, fight scenes, which I was happy to provide. (In fact, the samples I sent him are a big part of my serial project, Seasons of Truth (http://www.bhagwanx.com/writer/buy-my-books/seasons-of-truth/)
After we’d determined working together was a good idea, we sat down over enchiladas and margaritas and found a corner of the Foreworld for me to develop, that in fact had strong links to characters in the main plot itself! I signed on to the overall sidequest project, and the rest is alternate history!
N: We both have stories set in Pompeii of 79 AD, though very different ones. What drew you to that setting?
SJM: The idea for Blood and Ashes (http://www.bhagwanx.com/writer/buy-my-books/blood-and-ashes/) hit me as soon as I realized that writing Foreworld stories in the ancient world was even possible. I roughed out a treatment soon after finishing Hearts of Iron.
The original story was more or less what you see in the book today, but as I started writing I realized how much more could be done with the characters and setting. Given my druthers, I could easily add another 50-60K words to the book and start an epic adventure series. But part of playing in someone else’s sandbox is respecting boundaries, and I’m very happy with the book we turned out.
N: What is your typical day like? Where do you get your best writing done — home, coffeehouse, other?
SJM: I can write just about anywhere, but the real creative times happen when I’m in my own chair in front of my own computer. At the time of this writing, I’m in-between paying gigs, so a typical day involves breakfast, and maybe lunch as scheduled activities. I write when I have a story in my head, no matter where I am at the time. Luckily, I’ve got a lot of stories waiting to be told.
N: Do you outline in advance or are you the fly-by-the-seat-of-your-pants kind of writer?
SJM: I’m an outliner. I see stories in my head, start to finish, and know a lot of the important elements before I even start writing. So when I start a project, I get them all down on one piece of paper and then promptly ignore it in favor of getting the words out. I usually end up with something approximating what I wanted to do, and then I write it again. And again, as many times as necessary to get it sold.
N: Favorite quote about writing?
SJM: Hand’s down, it’s Dorothy Parker:

“If you have any young friends who aspire to become writers, the second greatest favor you can do them is to present them with copies of The Elements of Style. The first greatest, of course, is to shoot them now, while they’re happy.”

N: Just because I’m curious about how other authors function — do you read your Amazon and Goodreads reviews?
SJM: As they come in. I want to know what worked or didn’t with my readers, so that my next project will be better. Not for them, but for me. And I’m hoping to get a whole bunch more in the next month or so, to make my next book really shine.
N: E-books or paper ones?
SJM: Yes. There is no real difference between the two in terms of content, just experience. As I type this I am surrounded on four sides by many thousands of books (I am , in fact, at home, in only one of 6 rooms so adorned), and I still read and collect physical copies.
For me, reading a paper book is an experience worth savoring. Even though I read very fast, the act of selecting a book, finding a place to sit, and then reading it to the end is time dedicated completely to myself. But my e-readers (kindle, tablet, phone, portable computer) allow me to access content anywhere, any time, and in whatever window I have available to me.
Both formats allow me to live in someone else’s world, but one weighs a lot less and packs easier when travelling.
N: Finally, what are you working on now?
SJM: Besides finding a job? I’m continuing my marketing efforts for Seasons of Truth (tell all your friends!), and ramping up for the release (both hardcover and electronic) of my science fiction novel Homefront in November. I also have a novella outlined for later this year, have another novella planned for early 2015, and a science fiction novel that I wrote last year which failed to find a home. I plan to add another 50K words to the front end (which would replace some 15K of those already written) of that book and shop it around again later this year.
Or, I’ll write whatever somebody pays me for. I’m good like that.