Skip to the content
Today I welcome Charlie N. Holmberg to the blog — her just-released young adult debut, The Paper Magician, is already rocking the Kindle bestseller lists! Charlie stopped by to talk about one of the less glamorous tasks faced by a writer, designing promotional materials, and how things didn’t quite go according to plan. Read on:
The making of the bookmarks for The Paper Magician was fun, but also ended up being quite a handful! This is namely due to my publisher’s decision to change the book’s cover literally days after the first set had been printed up. But it all worked out in the end.
Because The Paper Magician is my debut novel, I had never actually designed a bookmark before. That, and I’m not a designer, so I relied heavily on my friend Sara’s skills. (Sara has also done many a commission for me. She’s excellent.) For the bookmark, we decided to include a picture of Ceony, my protagonist. I sent Sara a description of what Ceony looked like, along with a few references pictures, and then got to work on the text.
There is NOT a lot of space on a bookmark for text, let me tell you that. I Googled several bookmark layouts and studied a few designs from fellow 47North authors to get an idea of what I should include. At first Sara and I tried using a logline for the book, but ultimately we went with a very trimmed-down version of the pitch. Trimming that sucker wasn’t the most fun thing I’ve done in my life. 😉 I also had to decide what authorly information to include, and ultimately kept it simple: just my website.
For the commission of Ceony, Sara originally tried the idea of her turning into paper, but the graphics weren’t coming out the way we wanted them to, so she used her genius to incorporate dozens of paper cranes. She matched the bookmark background to the cover and played up the snowflake motif to create the winning design: 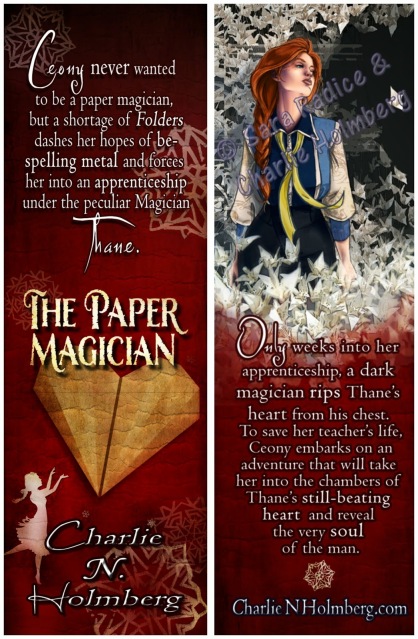 Then the cover changed, but fortunately we weren’t back to square one. Sara changed the color scheme and had to nix the snowflakes, instead drawing out the diagram-like lines that decorate the second cover. She added some rolling paper effects as well, which I love, and we got bookmark #2!

I really lucked out using Sara as my designer, since she also happens to work for a printing company. 😉 As for the old bookmarks… we’ll just say they’re collector items.
****
Homegrown in Salt Lake City, Charlie was raised a Trekkie with three sisters who also have boy names. She writes fantasy novels and does freelance editing on the side. She’s a proud BYU alumna, plays the ukulele, and owns too many pairs of glasses.
Website: CharlieNHolmberg.com
Twitter: https://twitter.com/CNHolmberg
Goodreads: http://bit.ly/1q2JDCC
Amazon purchase page: http://amzn.to/1yjGbom